I seem to be gravitating towards lemon-based recipes a lot at the moment – it must be the onset of spring that’s making me crave some lovely lemony flavours. I made these lemon yogurt muffins with a strawberry jam filling on the spur of the moment, when I was feeling a bit stressed/sad and just needed the joy of baking to pull me out of it.

They were really easy to make – I found a basic for the muffins online and just added the jam. I’ve made some adjustments to my recipe (at the end of this post), as I think the original recipe didn’t call for quite enough sugar, and the baking time could have been reduced – you can see from these pictures that my muffins are a bit browner than usual!

Aside from that, these muffins really are deliciously tangy and nicely soft thanks to the yogurt. Definitely go for the full-fat stuff here – low-fat yoghurt just won’t cut it, I’m afraid! The jam adds some much-needed sweetness considering the low sugar content of the original recipe – the muffins could still do with a bit more sugar though! (Apologies to your dentist).

Adapted from this recipe

Well, it’s been a little while since my last post. I haven’t really had the time to bake much recently; I went to Paris the other week (it was amazing) but, unfortunately, my new job didn’t quite work out, so I’m now a freelance copywriter and on the hunt for a new permanent role. It’s all been a bit unexpected and fairly stressful, but I’m past the worst now – so much so that I made this rather lovely lemon and coconut cake with strawberry jam earlier in the week!

The recipe is by Chetna Makan of GBBO fame. You may remember that I’m a huge fan of hers and that I successfully made her masala chai baklava a few months ago. This traybake was a tad easier to make and I got to indulge in one of my favourite pastimes in the process – throwing way more coconut into the mix than the recipe calls for.

The recipe is really easy to follow. Just make a basic cake mix, stir lemon zest and dessicated coconut into it, bake and then top the cooled cake with jam and more dessicated coconut. The recipe says to use raspberry jam, which is the classic choice when it comes to coconut, but I didn’t have any and used strawberry jam instead.

Amazingly for me, the cake baked perfectly in the time specified by the recipe. It’s a miracle! I’m a fairly impatient person and found it difficult waiting for the cake to cool so I could top it and eat it, but I just about managed it. The resulting cake was delicious – the sponge itself wasn’t overly sweet, but the jam balanced that out and the tang of the lemon zest was beautiful. Just what I needed after an insane few weeks!

I would heartily recommend this cake if you’re looking for something really easy to knock up for teatime. I can imagine that it would be a lovely pudding served warm with custard, too!

Can be found on the Food Network website here.

I’m the kind of person who easily gets a bee in her bonnet about seemingly small things. People walking slightly too slowly in front of me, misplaced apostrophes, sales assistants who place my change directly on top of the receipt before handing it to me instead of giving me the change and receipt separately… they all annoy me. However, I’m sure we can all agree that cake is NOT a small thing. Especially the matter of how to make a Victoria sponge ‘properly’.

I’ve always made it in what I firmly believe to be the only way you should – two airy sponges sandwiched with something creamy and something fruity (ideally buttercream and strawberry jam respectively, but anything else that’s creamy and fruity is fine). So I was aghast when I learned that the Women’s Institute, that veritable paragon of ‘proper’ baking, tells impressionable bakers who may not know any better to forgo the ‘something creamy’.

I hasten to add that they do this as standard in their recipe, but then add a note saying to use cream on a “special luxurious occasion”. My response to this is…. NO. A Victoria sponge without a lovely layer of creaminess isn’t worth having, special occasion or not. What on earth is meant to offset the airy sponge and sweet fruit if not something creamy? Where’s the FUN?

I’m not the only one who feels this way – I was heartened to read that Felicity Cloake of the Guardian also agrees with me (and in fact she pretty much sticks her tongue out at the WI by adding double cream to her buttercream), as does Great British Bake Off series 2 winner Edd Kimber. Unfortunately, the unofficial patron saint of British bakers Mary Berry confuses things by posting a cream-free recipe on her website along with a photo of a cake bursting quite rudely with cream.

If anyone has an argument for doing it the WI way, other than the frankly rubbish argument that you consume fewer calories, I’m all ears. But I’ll still do it the right way.

JUST LOOK AT THE CREAMY JOY

Now that I have my rant out of the way, here’s a Victoria sponge I made recently. I gave it a little twist by adding sliced fresh strawberries to the filling of buttercream and not as much strawberry jam as usual, and it was bloody lovely, even if I do say so myself. It’s just the perfect summer cake and one that’s quite timely if you’re planning to bake it in the next few days, as it just so happens to be National Afternoon Tea Week. That obviously doesn’t matter if you don’t need an excuse to take afternoon tea, like the Queen, who has it daily. And why the hell not?

For the buttercream filling (or use whipped double cream):

I love the flavour of blackcurrants, but having never seen fresh ones for sale, I’ve never had the chance to bake with them. I did, however, console myself with the help of blackcurrant jam, tinned blackcurrants and this rather quick and easy recipe for blackcurrant Bakewell cake the other week.

This is really is a ridiculously easy cake to make. Everything apart from the jam gets mixed in one bowl and thrown in a tin. Bake for a bit, add the jam, and bake for a bit more. Et voila! Blackcurrant Bakewell cake.

As is my wont, I did improvise a little by adding tinned blackcurrants along with the jam, in the hope of imparting more of a fruity flavour. It definitely worked, and created a pleasing tang that went nicely with the sweet jam and almond extract.

Of course, tinned fruit is no substitute for fresh, but I live in hope that one day I will have some fresh blackcurrants to go mad with…

My boyfriend has been pestering me to make Viennese whirls for YEARS. Then he bought me a biscuit maker as a ‘housewarming present’, so I had to make them. Of course. But I’m glad I (or we – he did at least help) got round to it – these lovely little treats are absolutely divine!

The biscuit dough was pretty easy to make – the recipe I used (from the Hairy Bikers) called for everything to be mixed in a food processor, but I had to use an electric hand whisk due to the tiny proportions of my food processor. We reached a slight sticking point when attempting to use the biscuit maker for the first time – it took a bit of trial and error, but we managed to go from producing weird little lumps to churning out lovely star-shaped beauties.

My biscuit maker. Put the dough in, choose the right attachment and push down on the handle. 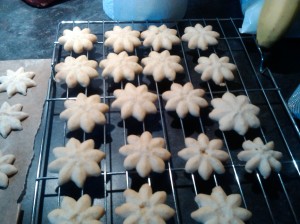 Viennese whirls, fresh from the oven

They only took 13 minutes to bake, although we ended up baking many, many batches so it took a bit longer than that! Once they’d cooled, we sandwiched them together with buttercream and seedless raspberry jam. And ate about a hundred during the process, for, erm, testing purposes.

I cannot emphasise enough just how lovely these are. The biscuit is beautifully rich (and I should think so, what with a WHOLE BLOCK OF BUTTER going in the mix) and is set off perfectly by the sweet buttercream and fruity jam. It’s really, really hard to eat just one, or three, or ten. So be warned!

Error: Twitter did not respond. Please wait a few minutes and refresh this page.